One of the chief arguments against hell is that a loving God wouldn’t consign anyone to eternal punishment.

I appreciate this sentiment and think it’s a typical response to the notion of eternal suffering, at least in the West. (Punishment, judgment and severity are not strangers to some religions of the East.) The assumption in this argument is that God is good and, in his goodness, and love he could not, with any real finality, give anyone over to eternal punishment.

This argument tends to fail, or at least falter, when someone like Hitler, Stalin, or Mao are brought up, public figures known for mass murder and cruelty. Yes, most people tend to

say, someone that evil or wicked might be consigned to endless punishment by a god whois otherwise good and loving. But those who are willing to admit the possibility of hell for notorious, mass murderer types are also letting themselves and everyone else remotely like them off the hook, there being no likelihood of mass murder in their own future or among those they know or know of.

It’s that conclusion, that hell is out of the questions for most of us, that makes us in our own judgment, whether it’s conscious or not, greater, better, more loving than God himself, at least the God of the Bible.

I believe it’s this elevated estimation of ourselves and this corresponding betrayal of the real goodness and love and perfections of God himself, that leads so many of us to reject Christ, God, the Trinity and the Bible. Hell is the great sticking point.

Example: though Joshua Harris hasn’t spoken these sentiments specifically in his recent departure from Christian faith, he has communicated regret over having held to biblical morality in the past and has apologized to those embracing behaviors the bible clearly teaches are sin (links below).

There’s been a clear progression in his public communications regarding past held beliefs and new perspectives regarding the same.

In his documentary, I Survived I Kissed Dating Goodbye he travels the country to meet with people who read his book, I Kissed Dating Goodbye, most of whom felt betrayed, misled or otherwise harmed, from that work. The film displays not just his empathy for those who felt somehow let down by his book, but his own journey from an advocate of “courtship”, in opposition to “dating”, to dating as a healthy norm. (Whatever you think of that book’s content the point here is that his beliefs/opinions morph based on his interaction with other people.)

When Harris tweeted he no longer considered himself a Christian, he included an apology to lesbians, homosexuals, bisexuals, etc.,

… to the LGBTQ+ community, I want to say that I am sorry for the views that I taught in my books and as a pastor regarding sexuality. I regret standing against marriage equality, for not affirming you and your place in the church, and for any ways that my writing and speaking contributed to a culture of exclusion and bigotry. I hope you can forgive me.⁣⁣

Harris appears to be repenting of his previous, biblically informed understanding that those who claim lesbian and homosexuality identities exclude themselves from those who are meant to enjoy fellowship in the body of Christ (1 Corinthians 5) or who can with any confidence claim forgiveness in Christ and the hope of heaven (1 Corinthians 6; Ephesians 5)

What happened? What led him from the clear teaching of God’s word to the opinion of the world? What takes any of us from loving the Lord our God above every other love (Matthew 22) to establishing our own version of love for others as the summum bonum?

I think, at least in part, that when one sinner contemplates the fate of another sinner as one of eternal separation from God in the lake of fire, the second death, a place of no hope, no joy, no fellowship or improvement, ever, it overwhelms our natural sympathies. And I believe it’s in that state of mind that the idolatry of preferring fellow mortals to our God and Creator often slips in.

At that point, if we fail to consider God in Christ on the Cross, dying for our sins, being buried in our stead, and rising for our justification, we’re tempted to justify ourselves at his expense by saying we wouldn’t consign anyone to hell. We declare ourselves more loving than God. Wiser than God. Better than God.

That is not only hubris of the highest imagination, but the cowardly unbelief that identifies those God considers fit citizens of hell:

But as for the cowardly, the faithless, the detestable, as for murderers, the sexually immoral, sorcerers, idolaters, and all liars, their portion will be in the lake that burns with fire and sulfur, which is the second death. Revelation 21:8

The gospel shocks our system in both its bad news and its good. We are so fallen that “good” people like us deserve nothing but God’s perfect judgment. The good news then appears as what it really is, life out of death, freedom out of tyranny, joy out of endless sorrows, because God loves us like no one else can or does.

Jesus on the Cross remains the ultimate assessment of our race: too bad to accept as is and too loved to be left to ourselves. 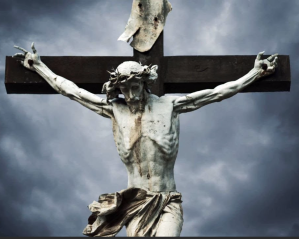 When we’re tempted to think ourselves more loving than God we need remember the sinless Son of God on the cross, bearing the punishment due us. Then we can weep and dance for joy and tell anyone who will hear that there is a Savior and that their night like ours can be turned to day, in the loving embrace of our loving God.