`Would you tell me,’ said Alice, a little timidly, `why you are painting those roses?’

Five and Seven said nothing, but looked at Two. Two began in a low voice, `Why the fact is, you see, Miss, this here ought to have been a RED rose-tree, and we put a white one in by mistake; and if the Queen was to find it out, we should all have our heads cut off, you know. So you see, Miss, we’re doing our best, afore she comes, to–‘ At this moment Five, who had been anxiously looking across the garden, called out `The Queen! The Queen!’ and the three gardeners instantly threw themselves flat upon their faces. There was a sound of many footsteps, and Alice looked round, eager to see the Queen…

…Said the Queen, `You make me giddy.’ And then, turning to the rose-tree, she went on, `What HAVE you been doing here?’

`May it please your Majesty,’ said Two, in a very humble tone, going down on one knee as he spoke, `we were trying–‘

`I see!’ said the Queen, who had meanwhile been examining the roses. `Off with their heads!’ and the procession moved on, three of the soldiers remaining behind to execute the unfortunate gardeners, who ran to Alice for protection.

Lewis Carroll’s tale of Alice in Wonderland and the figure of the Queen of Hearts could hardly be more apt in describing the current climate for “white roses” in our own day.  The white roses I’m thinking of are religious convictions.

While the Queen of Hearts in Alice is an over the top caricature, her equivalent in our own day is hardly less vociferous or impatient to cry, “off with their heads” to white rose loving subjects.  Here I’m thinking of homosexual activists and the government figures and courts that carry the axes used for the beheadings of those who would like to grow those audaciously white roses.  Beheadings these days look like court ordered wedding cakes provided by white rose loving Christians, or wedding pictures provided by those who don’t realize red roses are to be celebrated by all. 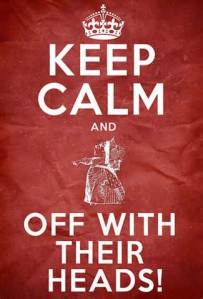 Ours has become an “off with their heads” culture and the heads rolling belong to Christians who hope to live according to a white rose view of the world.

Of course those who are the Queen of Hearts equivalent today would refuse the comparison to this bloody tyrant;  rather, they call their ax wielding labors steps toward procuring the current holy grail,  “toleration”.  But tolerance is always in the eye of the beholder and the “toleration” being touted today by the Queen’s cultural descendants is no toleration at all.

The historic toleration afforded by the Judeo Christian ethics that informed the West has given way to a very intolerant view now held by governments who hail the summum bonum as a red rose version of toleration.  They do so as they very intolerantly trounce on their members who still hold to the old fashioned, but now out of vogue white rose worldview, the one that afforded their ascendency in the first place.

It’s a safe bet that the group yelling loudest for toleration is the one seeking power to be intolerant.  And as the strategy of appealing for toleration has run its course, those who have granted toleration in the past now find themselves at the sword point of the very intolerant new majority.

In the sphere of toleration, historic and contemporary, there could be few books that more insightfully and helpfully speak to the red rose zeitgeist of our day than AJ Conyers, The Long Truce, How Toleration Made the World Safe for Power and Profit.  Here are a few of Conyers thoughts on toleration.

“…. The central power makes peace with groups by detaching them from their spiritual essence and then testifying to its respect for the dispirited remains of what was once both the body and soul of a culture.”

“…groups arise from the power of love and the organization of the state arises from the love of power.”

“…toleration is the pragmatists substitute for love.”

Conyers points out that toleration is not a virtue, but a strategy for divergent groups to coexist.   However, in our own day, toleration has become not a means of coexistence but a hammer with which to beat down the opposition.  The government and courts accrue more

and more power to enforce a red rose version of toleration.  Love that used to bind neighbors to God and to each other is replaced with a cudgel-threatening toleration meant to instill one-kneed obeisance to the new Queen.

One of Conyer’s key points is that in the arena of toleration it’s not whether or not there will be limits on what’s tolerated, merely who it is defining those limits.  While the Church in the West used to provide the grounds and limits of toleration today it’s the State.  The State has now replaced the Church as the determiner of what’s to be tolerated, as well as the entity enforcing the limits of this new “toleration”.

The Church in the west finds itself more and more like the early Church in the Roman world, a minority out of step with the larger culture, and paying the price for its white rose differences with literal, or metaphoric beheadings.

I don’t believe this trend will be mitigated any time soon.  The newly ascended Queens of Toleration will no doubt continue to hold to the maxim— “everyone knows white roses are simply not to be tolerated.”  In the face of this new brand of toleration Christians will be tempted to return evil for evil, intolerance for intolerance. Let’s not.

We find ourselves in a time in which we may nobly follow early Christians who suffered gladly for Christ’s name (Acts 5:40-41).  Like the Leader of our Faith, they loved the unlovely, bore patiently when insulted and assaulted, and ultimately committed themselves to a Judge who judges rightly.

We need remember that in the end it’s not the Queen of Hearts but the King of Kings who reigns supreme, and toleration as a strategy for coexistence will be entirely unneeded in the perfection of the new heaven and new earth.

Until then Christ followers are called to follow his example while suffering and proclaim the excellencies  of a white rose  loving King and His coming Kingdom.