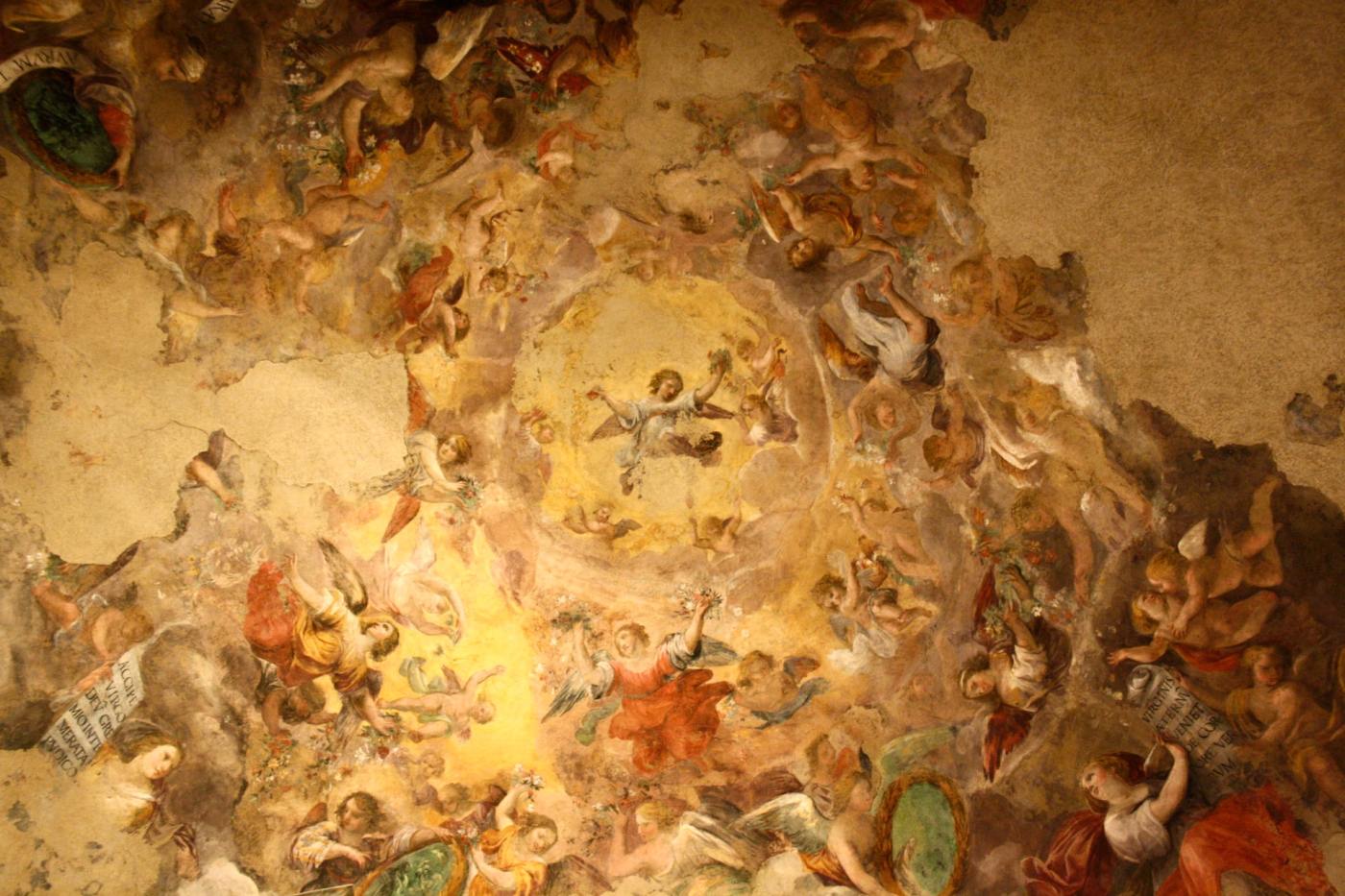 The celebration of Christmas is, for many people, an occasion filled with tradition. We set up an evergreen tree and hang ornaments on it. We bake family recipes that have been handed down from our grandparents, to our parents, to us. We sing Christmas carols together, pondering the references to “figgy pudding” and “Good King Wenceslas.” We watch the same Christmas films year after year, our eyes somehow glued to the screen, even though we already know Clarence does get his wings in the end. And, I have to admit, even though I am not much for television, it is always refreshing, in our modern, materialistic world, to hear Linus conclude his recitation of Scripture, saying, “Glory to God in the highest, and on earth peace and goodwill towards men.” For many of us, we become very attached to our Christmas traditions.

Unfortunately, in the busyness of the season, we often lose our focus on the significance of these traditions. We take part in the traditions because we always have done so. But we do not actively think on the reason that a tradition got started. How many of us think about the reason why we cut down trees, haul them indoors, and hang things in the branches? Do we really know why people started hanging stockings in front of the fireplace? For that matter, do we bother to figure out why there is a reference to figgy pudding in a Christmas carol?

When it comes to reading the scriptural account of the events we celebrate at Christmas, I fear we face a similar shortcoming. We all know how the story goes (or at least we think we do). We know that an angel made an announcement to Mary, and then appeared in a dream to Joseph, telling them that Mary, a virgin, would conceive and bear a son by the power of the Holy Spirit. We know that the child would be called “Immanuel,” meaning “God with us.” We know that He was born in a stable and placed in a feeding trough, as there was no bed for Him. We know that angels announced His birth to shepherds, and that wise men (Magi) from the East subsequently came, following a brilliant, mysterious star, to bring the Christ-child gifts.

But do we know why? We read the story every year—a tradition—and it might be so familiar to us, that we do not really think about it. What is the significance of all these unusual things surrounding the birth of the Lord Jesus Christ? And, more specifically, what is the significance of these two very different groups of visitors? Why did an angel announce the birth of Jesus Christ to shepherds of all people? Why did Magi, people from a distant land, come bearing their gifts? Today, we are going to begin looking at the biblical accounts about these visitors so we can better understand just how important they are and just why they came. Why shepherds? Why Magi? What is the significance of these two groups going to see the young child and bearing witness to the coming of Jesus Christ? We will see.

We will begin by looking at shepherds’ visit, recorded in Luke 2:8–20. As one commentator says, “The pastoral scene described in this section [of text] actually conveys more theological significance than is sometimes realized. Both the words of the angel and the symbolism of what happened have theological implications.”*

The Announcement to the Shepherds

In the same region there were some shepherds staying out in the fields and keeping watch over their flock by night. And an angel of the Lord suddenly stood before them, and the glory of the Lord shone around them; and they were terribly frightened. But the angel said to them, “Do not be afraid; for behold, I bring you good news of great joy which will be for all the people; for today in the city of David there has been born for you a Savior, who is Christ the Lord. This will be a sign for you: you will find a baby wrapped in cloths and lying in a manger.” And suddenly there appeared with the angel a multitude of the heavenly host praising God and saying,
“Glory to God in the highest,
And on earth peace among men with whom He is pleased.”

Here we see an entirely unexpected visitation. A group of shepherds, settled in for another night of watching over their sheep, was suddenly greeted by an angel appearing in the full radiance of God’s glory. This setting is foreign to us, so a little background is helpful in trying to understand the account. The shepherds in Luke’s Gospel would have been residing in the Judean hill country outside of the then-small town of Bethlehem, about six miles or so from the city of Jerusalem. Even though the sheep were penned up at night, the shepherds would still have needed to remain with the sheep, to protect them from the threat of robbers and varmints. This was possible because of the mild climate of the region. But instead of bandits or dogs, this night the shepherds saw something truly different—an angel.

When the angel appeared to the shepherds, the glory of the Lord was manifested in shining brilliance. There was no need to light the torches to see this unexpected visitor in the night; there was plenty of light already! The Bible tells us that the shepherds were terrified. Why? For starters, the angel’s appearance was sudden, and the shepherds were in an occupation in which being snuck up on in the night was typically not appreciated. But more importantly, the fact remains that they were greeted by an angel. Many of us have misperceptions about the appearance of angels—and the Christmas tree toppers which have become common in recent years do nothing to help us. Never are angels described in Scripture as petite blond-haired women. Nor are they described as cute baby-like winged cherubs, as we see so often depicted in romantic artwork. When angels show up in the biblical text, they are presented as very powerful beings, superior to humans in stature, strength, speed, and intelligence. In many ways, angelic beings are superhuman. How would you do meeting a real-life “Man of Steel”—especially if his intentions were not altogether apparent to you?

The angel’s first words, accordingly, are “Do not be afraid,” and his message quickly revealed that what he came to announce was to be a source of happiness, not fear. He brought “good news”—not just for the shepherds, and not just for the nation of Israel—but for all people: A Savior had come. Bethlehem was called “the city of David,” because it had been the hometown of the great Israelite king a thousand years earlier. Now, as prophesied in Micah 5:2, the little town of Bethlehem played host to the birth of Christ. This word, “Christ,” would have attracted the attention of the shepherds. If they knew anything about the Jewish Scriptures, what we today call the Old Testament, they would have known of God’s promise to send a Messiah—translated “Christ”—who would restore the nation of Israel and deliver from sin all who would trust in Him for salvation. This was the one of whom Isaiah 61:1–2 long before spoke, “The Spirit of the Lord God is upon me, because the Lord has anointed me to bring good news to the afflicted; He has sent me to bind up the brokenhearted, to proclaim liberty to captives and freedom to prisoners; to proclaim the favorable year of the Lord . . .” This child was the Lord’s anointed one who had come to bring salvation.

The shepherds would identify the newborn Savior by the fact he would be laying in a manger and wrapped in swaddling cloths. This represented a sharp contrast. The newborn child was laying in a feeding trough in a stable for animals, indicating, on the one hand, rejection. But, on the other hand, he was wrapped in cloths, for both warmth and comfort; and this indicated his parents’ love. And this dichotomy would persist throughout Christ’s life: He would be loved by those who found salvation in Him, but rejected by so many others. This was the sign to the shepherds: A little baby—God’s anointed Savior—simultaneously loved and rejected.

After making his announcement to the shepherds, the lone angel was joined by a company of others, declaring God’s praise. This is the climax of the story. The Lord is to be worshiped on account of the wonderous thing that He had done in sending a Savior. Though seemingly insignificant, the little baby laying in a manger represented the culmination of God’s plan to bring redemption to all His people. The “peace” proclaimed by the angels in verse 14 is that peace which the Messiah brings (cf. Luke 1:79). Whereas before there was enmity between God and man on account of man’s sin, Jesus Christ would bring peace through His eventual death on behalf of others. For those who trust in Christ to take upon Himself the penalty for their sin and to grant them a righteous standing before God, there exists the greatest peace imaginable. Romans 5:1 says, “Therefore, having been justified by faith, we have peace with God through our Lord Jesus Christ.” And this peace attained through Christ’s sacrifice grants us so many other blessings. Romans 5:6–9 helps explain this truth more fully:

For while we were still helpless, at the right time Christ died for the ungodly. For one will hardly die for a righteous man; though perhaps for the good man someone would dare even to die. But God demonstrates His own love toward us, in that while we were yet sinners, Christ died for us. Much more then, having now been justified by His blood, we shall be saved from the wrath of God through Him.

This wonderful thing God has done, Romans 5:10–11 goes on to tell us, should spur us on in joyous worship of our God:

For if while we were enemies we were reconciled to God through the death of His Son, much more, having been reconciled, we shall be saved by His life. And not only this, but we also exult in God through our Lord Jesus Christ, through whom we have now received the reconciliation.

All this to say, it is not at all strange that the announcement of Jesus’ birth and the peace that He would bring for the human race be accompanied by a heavenly outburst of joyous praise.

Next time, we will look at how the shepherds responded to this amazing news.

†Photo by Annalisa Bellini on Unsplash